Philanthropists can help address over-incarceration in America and the serious harm it does to communities by supporting efforts to better understand and confront the network of companies that currently profit from the US prison and detention system—what criminal justice experts call “the prison-industrial complex.”

With 2.3 million people in confinement and nearly three percent of its population under some form of correctional supervision, the United States imprisons far more of its people than any other country. Mass incarceration in the United States harms both individuals and communities and is a significant driver of racial inequality, even while it often fails to advance the public safety objectives it purports to serve.

Mass incarceration is also big business. Skyrocketing incarceration rates in the United States have turned the criminal justice system into a multi-billion dollar industry, with $80 billion in government spending on incarceration in 2013 alone. A network of thousands of companies profits from mass incarceration, ranging from the companies that operate private prisons to the subcontractors that provide prisons with telecommunications, transportation, food vending, and many other goods and services. 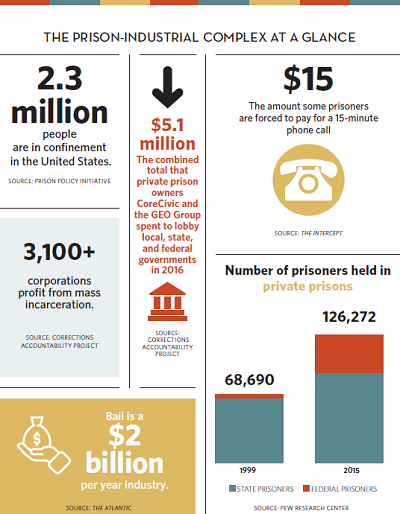 Criminal justice experts refer to this network as “the prison-industrial complex,” and activists and others charge that numerous companies within it engage in practices that range from contributing to violent, abusive, and dangerous conditions in prisons to exploiting prisoners through labor programs to charging incarcerated people exorbitant rates for basic telephone and internet services. Some of these companies also play a role in advocating for the very public policies that have driven mass incarceration and increased immigrant detention.

In recent years, philanthropists have invested significant resources in criminal justice reform efforts aimed at curtailing the system of mass incarceration and its deleterious consequences for communities of color. Funders have focused less attention on the prison-industrial complex itself and the role it plays in perpetuating mass incarceration and inflicting harms on economically distressed and vulnerable communities. Yet increasing the accountability of companies that are profiting from prisons and reducing the industry’s political influence is critical to restoring the public’s ability to shape just and equitable criminal justice and immigration policies and ending the era of mass incarceration. Moreover, through their endowments, philanthropists may be unwittingly invested in corporations within the prison-industrial complex–corporations whose efforts are directly at odds with such funders’ commitments to social, economic, and racial equity.

Today, our Arabella Advisors team is releasing a new report that provides an overview of the prison-industrial complex and outlines strategies philanthropists can implement to help reduce the influence it has and the harm it does to communities across the United States. These strategies include:

Ending the era of mass incarceration will require advocating for fundamental reforms to our criminal justice system, including rolling back unjust and inequitable sentencing policies and drug laws and reforming prosecutorial and policing practices that have caused prison populations to soar. It will also require confronting the power and influence of the prison-industrial complex. Concerned philanthropists can use their endowments and grant-making capital in creative and strategic ways to expose, stigmatize, and disrupt the practices of egregious actors within this industry, to neutralize its harms, and to undo the undue political influence it has. We hope this report will help them begin and advance such efforts.

Let's Have the Conversation

No matter your challenge, we’re here to help. Get in touch to learn how we transform your ideas into impact.